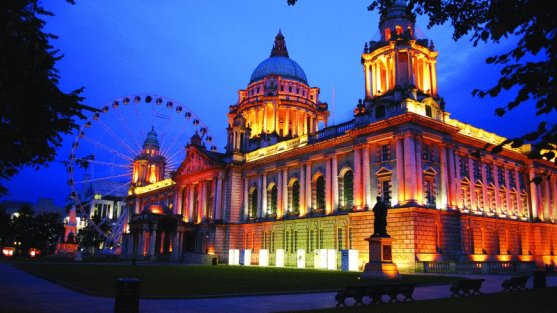 “Looks like Belfast next week for a couple of days” says work, “can do!” we reply, off to start working out where to go for a pint in the evening then…

Before anything else – here’s the map – Ukbeermaps – Belfast map

We were a bit pressed for the times and how long we could be out and about for this one, as if you’d ever want to be strolling in to work hungover or smelling of the night before anyway (no really, it’s just a bit of a cold), but even more so a problem when you’re in front of the client and management are there… pointing at things and “helping”!

So the normal research ensues, craft beer groups on facebook, ratebeer, untappd, google, anything in the books – and whatever people replied or had told us on twitter. We’d spotted Belfast come up a few times on some of these before, so knew of a few that we needed to go and find the names of, the memory vaguely remembered a massive looking stout from Galway Bay and a friend had once told us about a Coop brewery by the name of Boundary…

Kicked things off by necking a quick beer at the airport, once designated driving was agreed, closest they had to craft (we’re expecting a world of abuse for that one but fuck it).

On the first night we landed late and were lucky to be heading out by 10pm – with logistics being a factor we decided just to hit Brewbot & make the most of the 1 venue for the night. 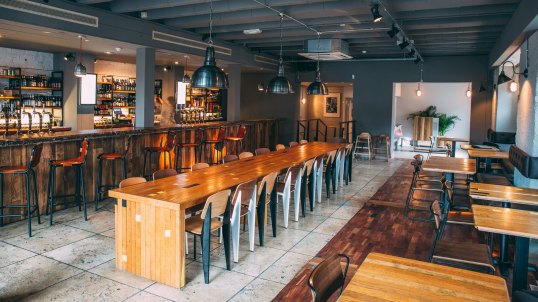 A wise decision in retrospect! Great staff, friendly locals, a good range on tap and even better in bottle. The industrial / loft style decor and layout were excellent – and spotted a few sets of people availing themselves of the bar’s various board and card games.

The (beer related) climax of the evening was the chance to have a look and a little play with the Brewbot machine – brewbot let me just get this out there now – they’re coming in at £1700 via the kickstarter page.

We’ve watched the craft beer world spit and hiss at the concept of this, which to be fair we kind of agreed with from a distance, but seeing the thing up close showed that it isn’t just an app on a smartphone and no actual brewing. It’s not the same as you’re own weird science or nutty professor lab, obviously, but it’s a fairly neat setup and it seems on the whole just the “management” or the “recipe control” of the brew is handled via the app – including notifications back about progress etc. Can’t see there ever being one in every home, between the price and the fact that home brewers seem to prefer to roll their sleeves up and dive in, but having seen it first hand the thing seems really interesting. It’s nowhere near as evil as people seem to think, this isn’t just a microwave or coffee machine equivalent, unfortunately for them that’s something it feels the press and PR of it hasn’t actually overcome so far. Good luck to them – and thanks for the demo! 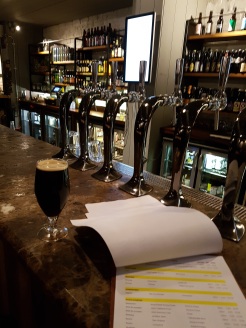 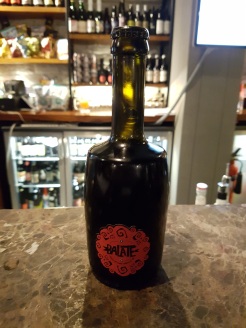 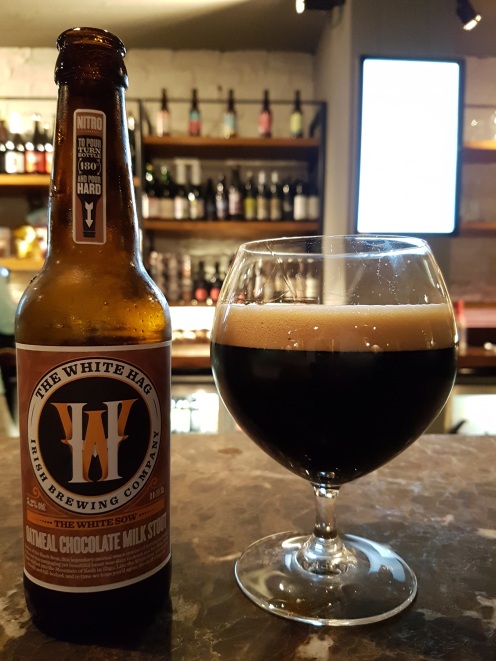 Day 2 saw the ugly beast of work rear it’s head, so we did our dance and earned our peanut, flitting between daydreaming of getting out that night (so almost missing what someone just asked us) or actually being focused and motivated to get a good job done as early as possible and “pop out for dinner and maybe a drink”….

En route back to the hotel we stopped off at The Hudson Bar for a flying half – hadn’t managed to dump the car yet. A decent little place, enough taps on and some bottles, did food too – seemed to warrant a bit more time at some point but unfortunately this was a flying visit to eye it up firsthand. This seems the sort of place you could stop off at on the way out, head to for the night out itself, or even pass some time on a weekend daytime pissing about on our phone like usual. Anywhere with TØ Øl (give us a break, that’s as close as we could get!) beers deserves respect! 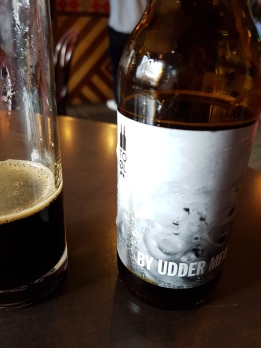 Car duly abandoned, route confirmed, three S’s done and the quick pat down to check where the wallet and phone were – and we’re off!

First up, as we’d checked and it had the football on and did food, the Garrick. Looked a potential tourist trap on the way in, and again at first glance, but we snaffled some stools at the end of the bar and watched it let the tourists bounce around but also cater for the locals and those wanting to have a proper look and enjoy the place.

A really impressive board up on the walls, looks like loads of taps, and countless fridges full of bottles of everything. We unearthed a new game that didn’t really amuse us, or the bar staff, called “whatever we ask for will take the barman 5 minutes to search for and realise they’re out of”. Once we were crowned unbeaten world champions, we moved on to all sorts that thankfully were in, luckily the range is so big no one ended up in tears or worse still – having to drink anything made by Guinness (should we have been so surprised to see Guinness and hop house lager selling so well?).

You’re not interested in what we thought about each beer really – why trust a blogger for that?! So here’s what we got through – the burger was great by the way and served it’s purpose of pre-empting a few beers very very well. 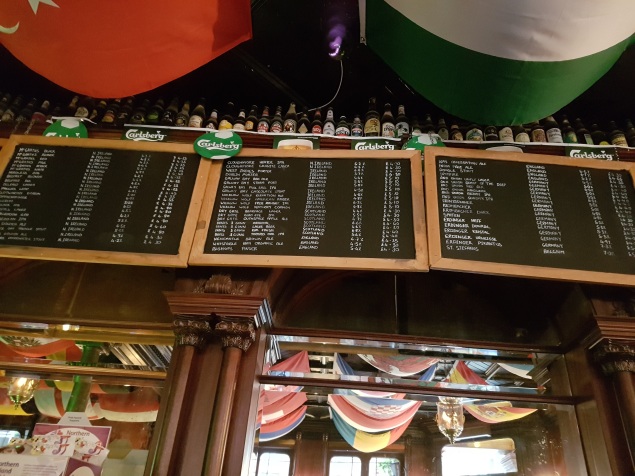 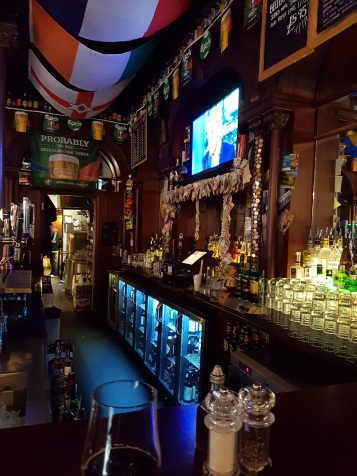 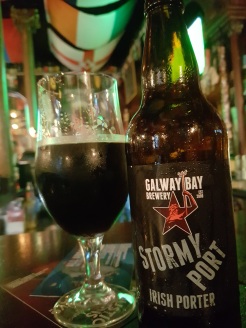 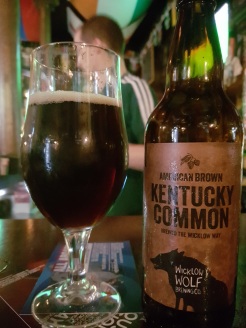 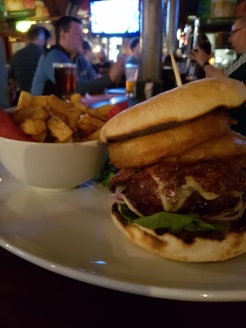 After finishing that lot and the game ended, we all decided to call it a night ready for work the next day, so “management” headed off to their hotel and we fucked straight off to another pub without them. Everyone’s a winner. Unless they ever read this….. 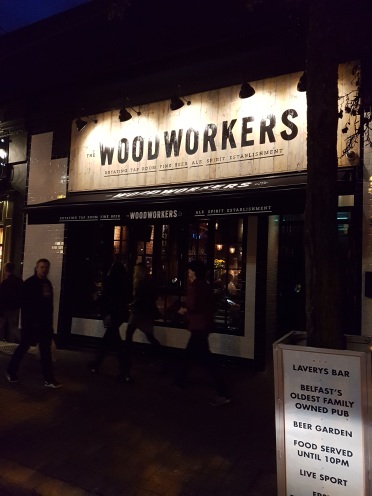 On to The Woodworkers then, joint 1st or at least 2nd highest on the list of what we were determined to get to whilst in town, and again with the benefit of hindsight that was also well deserved.

The smugness and joy of discovering a cracking bar inevitably leaks onto our faces as almost evil grins, that can only be topped (and is even furthered) by also finding a great beer there, at this point we have to remember to dial it down a notch or pay attention to things – let’s not forget we’re from out of town and we look smug and possibly even half cut! Quick reminder here that we saw zero trouble whatsoever in Belfast and everyone, without exception, was friendly and helpful.

Another very cool looking place, exposed industrial metal and brickwork, much bigger than you think inside and a pretty laid back DJ in the corner lining up some suitably good music. We tried to blag our way into the VIP area as we walked in, but the resident brewbot was having none of it, we’ll let the pictures speak for themselves on the drinks range- 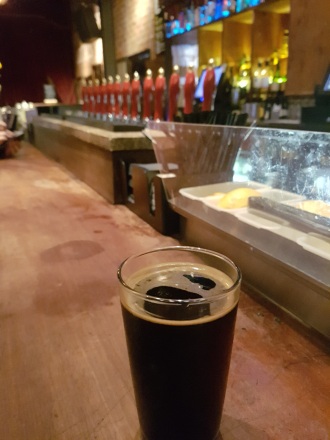 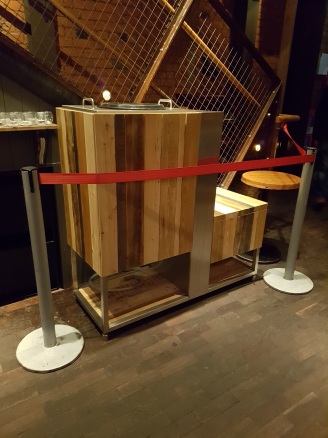 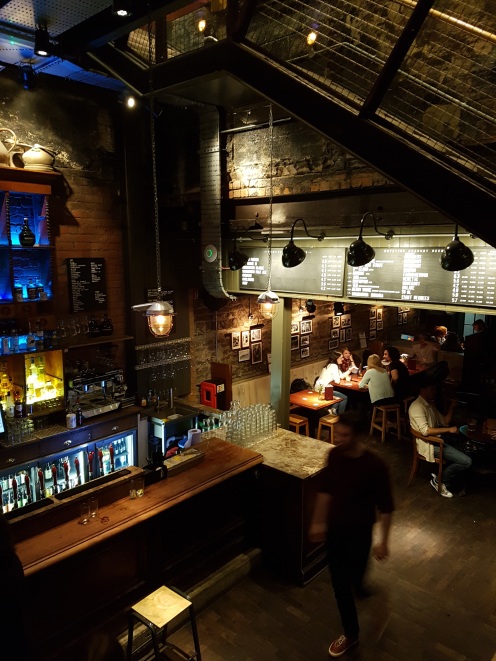 Great to see growlers (seemingly) available for purchase or fill here, and even as a fill to use instead of a pitcher at a table with a group (alone would be irresponsible to advocate… right?!), the theme of the beer seems to be 6 rotating taps – the next 2 in row are marked up on the board so you know what’s coming when something currently on runs out. Our first eyes on a “gender neutral” toilet, about which we were oddly excited and scared, resident shrink to look into that later.

Here we found our beer of the trip, one we had actually wanted to try for a while, Big Ass Stout from Boundary. We did say earlier you’re not going to care what we think of beer, but if you were to trust us on one thing, we know stouts – and this is a massive and quality number.

At this point things took a turn for the strange and surprising –  with an eye on a couple of bottles we ask “do you do takeout?”. We’re told no, but there’s an off licence next door we can use, now checking our watch twice we ask if we heard that absolutely right – it’s around midnight and there’s an offy we can go to? “Just come through this way behind the bar actually” they say – a quick thought flashes up – surely there can’t be someone back there waiting to clobber us and steal our kidneys? they know we’ve been here drinking them into submission! Nope, all legit, have a good night – exit through the bottle shop.

So the last stop, gone midnight on day 2, was a surprise and a little gem. Lavery’s bottle shop, in fact the whole place used to be called Lavery’s, but seems the bar was refurbed as Woodworkers a while back. High on the joy and confidence taken from Boundary’s Big Ass, we gravitated towards them on the shelves, grabbed a few and thought the fresh air on the walk back to the hotel would cancel out the beers.

We even managed to resist what must be the most tempting sign you are ever going to see after a few beers,  especially knowing a few more are on the way, at that point who doesn’t want a kebab – let alone a free one as well? Offy’s open til 1? Free kebabs? Belfast fuckin rocks right now.

Turns out the next morning we were without the client and working in the hotel anyway, lucky as we seemed to have a tiny bit of a cold, no one paid it any mind though, in fact it might even been a bit of flu as things seemed a tad warm and sweaty for a few hours. All worn off before lunchtime though so no harm eh.

Need to leave slightly earlier than planned for the airport, in fact how about “management” you make that quick confidential call whilst we’re on the way, we can hop out and occupy ourselves for a couple of minutes in a shop or something eh? Still a bit parched for some reason so we’ll grab some water – this place probably has some.

The Vineyard was impressive, if not for how much they can cram into the space, then for the (pegas?) growler station. 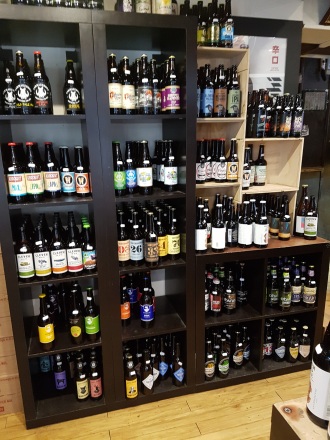 Nabbed a quick Doppelshot double bock by Maui brewing, a can so the safest bet for the hold baggage on the flight back, not sure why it always seems so impressive and cool to be drinking a beer in the UK all the way from Maui but they have always happened to be good as well. Right – late for the fucking flight now we’ve stood here dribbling over this lot.

Flight and journey home without incident, a lasting impression that Belfast was a friendly and good town for a beer, and the intention of getting back at some point to see how the scene has grown.

Completely out of the blue http://www.belfastlive.co.uk contacted us afterwards for a bit of an interview as they want to do a piece on us and the event!

It’s linked below, we’ve calmed down now (we nearly did ring our mums), it was very cool and flattering – but we really aren’t famous and we haven’t made it…. YET!

Thanks for reading – let us know if we missed anywhere